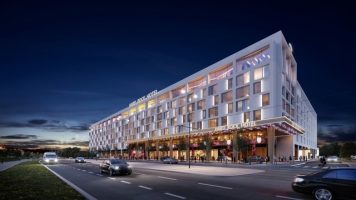 Hard Rock Hotel Prague is all set to open its doors in 2023.

The brand has a presence in 75 countries at present. The high-end hotel will have 523 rooms and suites and will be located within the wider city centre. The view from rooms of the Hard Rock Hotel Prague will be mesmerizing as it will boast views overlooking Letna Park and Prague Castle.

Prague happens to be a striking favourite among European capital cities and recently it has witnessed a great development in its tourism industry, says the senior vice president and head of global hotel business development, Hard Rock International, Todd Hricko.

Hard Rock Hotel Prague will be a short walk from the historic old town of Prague, and the Generali Arena, home of Sparta Prague Football Club.

There will also be a Hard Rock Sports Bar equipped with sporting memorabilia in connection with the football that will be adjacent to the hotel.

Among the other amenities of the hotel will be a coffee bar, a fitness centre and a business centre. Big events could be held in the hotel as it has a 59,000-square-foot ballroom that can accommodate around 1,800 people. The external Woodstock Lawn has been kept for exhibitions and social events.

The corridors of the Prague hotel have music memorabilia on display. The property also has a three-story Feature Wall, a 5,900 square foot soundwave of moving the light.

Recently the group opened its hotel in the Maldives, the 30th hotel of the group. Another hotel has been opened in Florida, which is the world’s first guitar hotel.

In 2020, more Hard Rock Hotels are supposed to be opened including one in Dublin, Amsterdam and Budapest each.