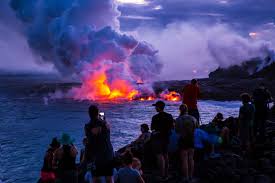 Hawaii’s Kilauea volcano continues to erupt and has been since May 3, as lava continues to dominate the Big Island with lava from “fissure 8” wiping out scores of homes in Kapoho.

But then, some tour operators who have operated on Hawaii’s Big Island for many years have voiced their apprehension at running tours to the volcano as people try to rebuild a life amid the destruction.

A tour operator named Shane Turpin has taken tourists on boat rides to see lava oozing down Kilauea’ slopes and into the Pacific Ocean several miles away for years.

However, when the molten rock burned down his and his neighbour’s houses after the volcano erupted in May, he briefly halted the tours.

The 39-year-old, who runs Lava Ocean Tours from Hilo, said that when the houses on the coastline were burning, the tourist ships were all, taken off from service.

Despite his reluctance, he had to go back to work to cater to the increase in demand from tourists to witness the latest eruption.

“Lava tourism” is now on the up on the Big Island and helicopter and boat operators are trying to please tourists and show respect for thousands of local who have lost homes or been evacuated.

Visitors numbers spike each time Kilauea has erupted as the volcano send a river of lava towards the ocean.

Arrivals to the Big Island declined by 1.6 percent in May year-on-year after the eruption, after several cruise ships cancelled port calls at Hilo and Kona, the island’s two main cities, the Hawaii Tourism Authority asserted.

However, tourists spending has risen by 3.3 percent to $173.9 million in May.

Residents have mixed feeling about noisy helicopters which fly over communities devastated by the volcano, like Leilani Estates and Kapoho Vacationland, which lost hundreds of homes.

Tourists on helicopter tours will see a 55 metre tall lava geyser, an eight-mile river of molten rock from fissure eight cascading toward the sea and a newly made volcanic wasteland pockmarked with the remains of over 650 homes.