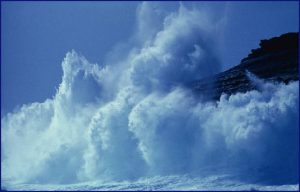 Hawaii was rocked by winter storm, damaging winds over the weekend.  It led to waves reaching 45-60 feet. Waimea Bay on the north shore of Oahu saw the waves tower to 60 feet on Sunday afternoon as per National Weather Service. Other parts of Hawaii saw the surf conditions up to 45 feet.

Gusty winds, reaching a high of 53 mph in Oahu, knocked down trees and caused power outages throughout the islands. About 26,870 customers throughout the state faced power disruption till 4 p.m. local time Sunday. Debris on Sunday closed roads in downtown Honolulu and in the Waikiki area.

The weather service issued statewide high wind warnings as well as high surf warnings for life-threatening conditions at several shores until Monday morning. However, a storm warning ended Sunday afternoon. A gale warning was also in effect until Monday morning for surrounding waters and channels.

The office forecast snow and ice on the Haleakala and Big Island summits through Sunday night, with visibility below a quarter-mile at times. The powerful, low-pressure storm north of the state, also brought periods of downpours.       Two evacuation centers and Red Cross shelter are in function.