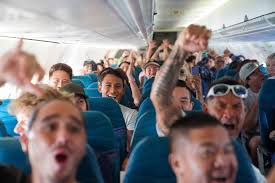 Hawaiian Airlines marked a very special occasion today: the 90th anniversary of its first flight from Oahu to Maui, which took place on November 11, 1929.

Ninety years ago, today’s flight, HA1111, travelled on the same day, route, and time as the original flight, departing Oahu at 9:35am and arriving at Kahului Airport on Maui at 10:17am aboard a Boeing 717.

Those passengers who were lucky enough to get a seat for as low as $59 a few weeks ago were treated to a few surprises during the flight. The first and most generous of those was a gift of 90,000 HawaiianMiles each of them received just for being on board.

They were also given birthday cards and a copy of the November 11, 1929 issue of the Honolulu Star-Bulletin with the airline’s original flight on the cover. Though back then, it was called Inter-Island Airways.

Over 70 teams of 12 people each tested their strength to see who could haul one of the airline’s Boeing 717s 12 feet in the shortest amount of time possible. Along with Hawaiian Airlines employees, teams from United Airlines, Alaska Airlines, FedEx, Hyatt Hotels and Bank of Hawaii all competed.

As for the other milestones in the airline’s history, here are a few fun facts from the past 90 years.

Though the airline’s first flight was on November 11, 1929, it was actually incorporated on January 30, 1929 under the name Inter-Island Airways. It had already carried over 10,000 passengers in 1930, its first full year of operation. Passengers on flights back then were given Wrigley’s chewing gum to help relieve ear pressure from the altitude changes.

Hawaiian Airlines’ oldest plane is actually a 1929 Bellanca CH-300 Pacemaker. Back then, passengers could pay $5 (the equivalent of around $50 today) for a short scenic flight over Oahu. The airline has restored the five-passenger, 300 horsepower monoplane, which had a fabric-covered frame and wooden wings, and it can still fly today.

In 1941, the name was changed to Hawaiian Airlines in anticipation of operating transpacific flights in addition to the inter-island network.

During the Pearl Harbor attack on December 7, 1941, the cockpit of a Hawaiian Airlines DC-3 operating flight number HA9 with 24 passengers aboard was hit by Japanese ammunition. One of the engines caught fire but was put out by a stray bullet hitting the plane’s fire extinguisher. The incident was featured on an episode of Ripley’s Believe It Or Not.

1943 was the year the airline hired its first stewardesses.

The airline debuted its first air-conditioned, pressurized planes in 1952 with the introduction of Convair 340s, each of which cost $520,000 at the time.

Hawaiian Airlines began commercial jet service from Los Angeles to Hawaii in 1960 and introduced its Pualani (flower of the sky) logo and livery, which it still uses today, in 1973.

In 1979, the airline flew the first all-female operated flight by a certified, scheduled U.S. air carrier.

The Frequent Flyer mileage program that eventually became HawaiianMiles in 1998 was launched in 1983.

The inaugural Sydney-Honolulu flight took off on May 17, 2004, and daily service to Tokyo began in November 2010. Then, in 2012, Hawaiian Airlines launched non-stop service from Honolulu to New York JFK, and to Boston in April 2019, which is the longest domestic flight in the world.

Today, Hawaiian Airlines flies over 10 million passengers a year and has a fleet of 67 planes in service, including Airbus A330s, Airbus A321neos, Boeing 717s and ATR 42-500s.

The gift is enough for a round-trip coach award ticket from Hawaii to Japan, Korea, Australia, or New Zealand, or a one-way business-class award with 25,000 miles leftover.