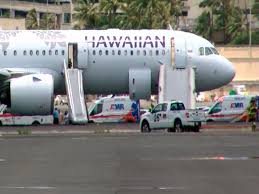 A Hawaiian Airlines plane with 191 people onboard suddenly filled up with smoke about 20 minutes away from Honolulu Thursday, forcing the pilots to make an emergency landing and deploy slides to evacuate the aircraft, airline officials said.

Five adults and two children were taken to hospitals with “smoke-related symptoms” after the plane landed at 11:36 a.m. local time in Honolulu, according to a statement from the airline.

Glenn Mitchell, the airport’s fire chief, said during a news conference that most passengers were suffering from minor respiratory concerns and that a few others complained of bumps and bruises that did not require hospital treatment.

During the news conference, which was posted on Facebook by the Honolulu Star-Advertiser, Hawaiian Airlines Chief Operating Officer Jon Snook thanked passengers for getting off the plane “in a very orderly way in what could have been a complex and dangerous situation.”

He added: “We’re very grateful to our guests. They left behind all their bags.”

It was not clear what caused the smoke, which was also present in the cargo hold. That set off a warning in the cockpit, prompting the emergency landing. Snook said there were no visible flames.

“The fact that the smoke was still prevalent on arrival, that was what was prompting the evacuation,” he said.

The flight left Thursday morning from Oakland, Calif. Snook said passengers will receive a full refund of their round-trip airfare and a voucher for future travel.