Haze worsens in Malaysia and Indonesia, Thousands of Schools Shut Down 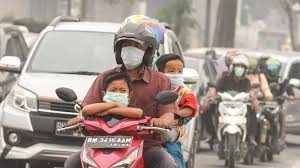 As toxic haze from rampant forest fires sent air quality plummeting, thousands of schools have been closed across Malaysia and Indonesia on Thursday, affecting at least 1.7 million students, officials said.

Nearly 2,500 schools were ordered to suspend classes in Malaysia — including nearly 300 in the smog-hit capital of Kuala Lumpur — over soaring health concerns sparked by toxic haze from out-of-control blazes in Indonesia’s Sumatra and Borneo islands.

In the Malaysian city of Kuching in Borneo island, air pollution index was recorded at 267 as of 0600 GMT, among the top 10 most polluted areas in the world, according to the World Air Quality Index. That is also categorised as “very unhealthy” by Malaysia’s environment ministry.

The closures affected at least 1.7 million students in Malaysia.

The fires belch smog across Southeast Asia annually, but this year’s are the worst since 2015 and have added to concerns about wildfire outbreaks worldwide exacerbating global warming.

In Indonesia, hundreds of schools in hard-hit Riau province on Sumatra island were also set to close on Thursday, with 800 already closed in one district alone, while about 1,300 were closed in its  Central Kalimantan province on Borneo.

Thursday’s school shutdown marked the first mass closure in Kuala Lumpur as air quality deteriorated to “unhealthy” or “very unhealthy” levels on an official index in many parts of peninsular Malaysia, to the east of Sumatra, with the capital’s skyline shrouded by dense
smog.

A growing number of Malaysians were suffering health problems due to the haze, with authorities saying there had been a sharp increase in outpatients at government hospitals — many suffering dry and itchy eyes.

The haze crisis comes as Singapore gears up to host a Formula One motor race on Sunday.

Poor visibility closed several airports in the Indonesian part of Borneo, and scores of flights have already been diverted and cancelled in the region in recent days due to the smog.

Authorities have tried to induce rain through a technique called cloud seeding in a bid to extinguish the fires in Indonesia.

Tags: Haze worsens in Malaysia and Indonesia, Thousands of Schools Shut Down