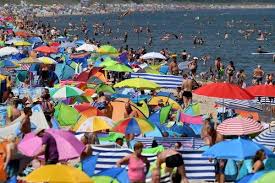 In a heatwave searing Western Europe, Belgium, Germany and the Netherlands have recorded their highest ever temperatures, Bernama News reported.

Germany’s weather service said a new record of 40.5C – just 0.2C higher – had been set in Geilenkirchen, near the Belgian and Dutch borders.

The new German record was still to be confirmed, it said, warning that it could get even hotter on Thursday.

The southern Dutch city of Eindhoven beat the 75-year-old national record, with a new high of 39.3C.

Elsewhere, French reports suggested five deaths might have been linked to the heatwave. The highest temperature recorded in Paris – 40.4C in 1947 – is expected to be surpassed on Thursday.

Authorities launched a red alert in the Paris region and 19 other French departments, calling for “absolute vigilance”, and comparisons were drawn to a heatwave in August 2003, during which heat contributed to almost 15,000 deaths.

Luxembourg is on red alert for the south and the capital – with temperatures possibly climbing higher than 40C on Thursday.

Germany had issued heat alerts for the entire country. By sunset, it announced at least 10 stations had reported temperatures above 39C – including ones in Cologne and Bonn, and Saarbrücken, all of which lie in the west of the country near the border.

Belgium has issued a code red weather warning for the whole country.

Spain declared a red alert in its Zaragoza region, which was hit by devastating wildfires last month. The European Commission’s Copernicus Climate Change Service says the risk of wildfires is high in Spain and in Portugal

Records going back to the late 19th Century show that the average temperature of the Earth’s surface has increased by about one degree since industrialisation.

A climatology institute in Potsdam, Germany, says Europe’s five hottest summers since 1500 have all been in the 21st Century.