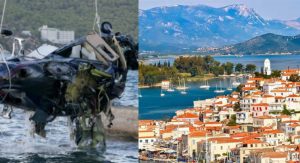 A helicopter crashed on the Greek island of Poros on Tuesday leading to powercut and causing the death of two Russian passengers and a Greek pilot after it landed in the sea.

The island is located a few hundred metres off the coast of the Peloponnese and is just an hour by hydrofoil from Piraeus which is the port for Athens.

The cause of the helicopter crash is still not known whether it struck the power lines or the pilot lost control and then hit them.

For Poros the lines from the mainland are the only source of power.

Geoffrey Baser, a regular British visitor to the island, said that the overnight generators and engineers have arrived and were hoping for power later today.

Poros is a popular destination with British visitors, offers a relaxed lifestyle and offers easy access to the sights of the Peloponnese and the island of Hydra.

An investigation by the Greek Air Accidents Investigation Committee started on Wednesday to find out the reasons behind the helicopter crash that happened.

It was too early to determine the exact causes for the fatal accident and the Committee could manage to verify that there was a mechanical problem with the helicopter.

At the initial stage of the investigation nothing was certain and the helicopter showed signs of some mechanical malfunction as soon as it took off from Poros.