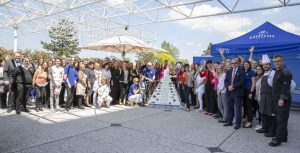 Hilton Worldwide now operates 5,700 hotels in 113 countries around the world – traversing a long journey that started 100 years back when Conrad Hilton bought his first hotel, the Mobley Hotel in Texas. Celebrations of the anniversary culminated on May 31st and took place in all Hilton Worldwide hotels around the globe, including Hilton Prague.

On this occasion, the importance of the Hilton Worldwide initiative “Hilton Effect” was highlighted. The ‘Hilton Effect’ is defined as the positive, world-altering impact that Hilton has had, and continues to have, on billions of lives and thousands of communities around the globe – pioneering new travel markets and bringing people and cultures together to make the world feel smaller, while expanding horizons and opportunities.  The Hilton Team created an atmosphere and spirit that was felt by hotel Guests, but also by partners and the community.  A special 10-layer cake displaying important milestones of Hilton Worldwide was cut.

Hilton Hotels in Prague have a robust corporate social responsibility program that gives all Team Members an opportunity to get involved in causes they believe in.  On the occasion of the 100th anniversary, a Garage Sale was organized in Hilton Prague where proceeds of 67 000 Czk (3 000 USD) were raised to support building of a children playground in the female prison Velké Přílepy. Hilton Prague Old Town hosted an auction My Big Wish in order to help secret wishes of seniors come true, the proceeds from the auction amounted to 160 000 Czk (7 000 USD).

The hotel management prepared several activities for Team Members as a thank you for their continuous support and efforts in their daily tasks. From special breakfast, lunch, awards, through daily raffles and cupcake distribution, the events culminated with a Friday family BBQ party at the Hilton Prague’s terrace.

Guests of Hilton Hotels in Prague had the opportunity to taste some of the “Hilton Firsts” during the celebrations. Hilton Firsts stand for products and services firstly seen in one of the Hilton hotels. Hilton Hotels in Prague offered to their Guests sampling of piña colada cocktails, firstly mixed in the 50s in Caribe Hilton San Juan in Puerto Rico, classical Martini cocktails, mixed in Waldorf Astoria New York for the first time at the end of the 19th century, or the red velvet cake, firstly presented in the same hotel.