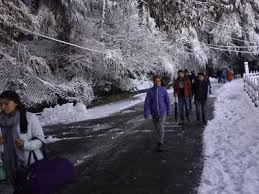 Efforts to revive the famous snow pits dug up during the British era and restore the lost glory of Himachal Pradesh’s capital are expected to change the tourism dynamics.

About 25 to 35 feet deep, these round snow pits were dug up in the colder areas of Shimla. Over six are located at Jakhoo, Harvington, Wildflower Hall, Barnes Court and Harcourt Butler School (now Kendriya Vidyalaya).

While the snow pit at Kendriya Vidyalaya has been filled up and made a part of the playground, the others, which stored snow and acted as the perennial source of ice throughout the year, no longer exist.

There were no refrigerators during the British era and the snow stored in these pits was carried in jute bags for cooling. Customers were ice-cream makers and cold drink sellers, who packed the double-walled tin boxes with frozen snow.

The cold areas received heavy snowfall, which did not melt and turned into ice in shady places. It was stored in the snow pits with the help of labourers and lasted all 365 days.

These pits also fed and recharged a large number of springs, but today things have changed.

There are no springs or snow, which enchanted tourists. “There are about six such wells, most in Jakhoo, while one is near the Wildflower Hall. We will take up the issue of revival of snow wells with the state government as these spots, which are heritage structures, could be a major tourist attraction,” said president, Tourism Industry Stakeholders Association, MK Seth, adding that photographs of these were also exhibited at the Gaiety Theatre recently.

The tourists’ stay in Shimla has been reduced from four-five days to a day. Efforts are being made to reverse the trend and activities like wildlife photography and bird watching are being added to the list of tourist attractions as a large number of birds of various species can be seen on the suburbs of Shimla like Glen, Shoghi, Ghanati, Narkanda and the members of the association are finding birding trails.