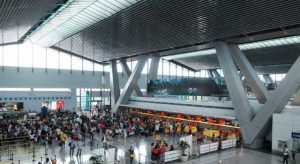 The Manila airport in the Philippines has failed to meet the international regulations. The United States Department of Homeland Security has advised the travellers to express increased caution when flying to this airport.

The State Department issued the travel advisory on Wednesday after Transportation Security Administration (TSA) security experts conducted the assessment of Ninoy Aquino International Airport in Manila. They found that it is not consistent with International Civil Aviation Organization (ICAO) standards.

TSA officials said they are working with the Philippine government to assist airport and transportation authorities in bringing the Manila airport up to international security standards.

Manila International Airport general manager Ed Monreal said that all of the issues raised by TSA officials have already been addressed or are in the process of being remedied.

The Secretary has also directed this advisory be displayed prominently at all U.S. airports that provide regularly scheduled service to MNL and that it be published in the Federal Register, pursuant to sections 114 and 44907 of Title 49 of the United States Code.

The airlines who issue the tickets for travel between the United States and MNL have been directed to notify passengers in writing of this determination as per the Homeland Security officials.