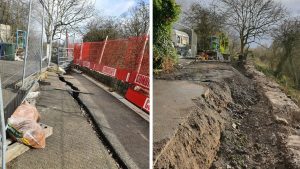 After persistent heavy rain, a 15m fault line suddenly appeared on top of a railway cutting at Pimbo Lane in Upholland, on the Kirkby to Wallgate line.

Engineers put safety first by evacuating two elderly residents from their homes and reducing the speed of trains through the area.

Emergency repairs were then completed by digging out and shoring up the slope to make it safe.

Rosie Cooper, MP for West Lancashire, said: “This incident could have been very serious but thankfully Network Rail’s vigilance has meant this was avoided and thankfully repair work was carried out immediately to the railway cutting near residents’ homes – residents were very pleased.”

“As part of our routine monitoring work, I’m proud that our emergency response teams kept people and trains safe from this landslip on the Kirkby to Wigan Wallgate line that was caused by Storm Jorge.

“We also showed that we care about our lineside neighbours by immediately strengthening the slope, so residents could safely and quickly return to their homes.”

The landslip occurred on Saturday, 29 February and emergency repair work was completed by Network Rail over the next three days.

With the residents now back in their homes, a more permanent repair is planned over the next few weeks.

Pimbo Lane on the Kirby-Wallgate line and the Dutton Viaduct on the West Coast main line, are two of several sites where Network Rail is protecting the ground from moving to keep important passenger and freight trains running.