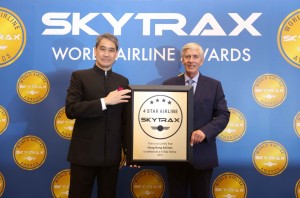 Hong Kong Airlines celebrated a big win yesterday at the prestigious 2018 World Airline Awards, when it once again retained its Skytrax 4-star rating. Thanks to our customers’ votes, Hong Kong Airlines also made historic headway in the global rankings and is proud to be represent Hong Kong in the top 20 list of the World’s Best 100 Airlines in 2018. The airline was also recognised as one of the top 10 airlines in Asia.

The World Airline Awards is widely regarded as one the industry’s top accolades, held in high esteem for its clarity of process and independence, with no outside sponsorship or external influence.

Hong Kong Airlines Vice Chairman Mr Tang King Shing, who accepted the award on the airline’s behalf, said that the recognition from Skytrax was an affirmation of all the hard work that Hong Kong Airlines colleagues have put in over the past year.
“This is an exciting time for Hong Kong Airlines, as we continue to grow from strength to strength. We will continue to improve our customer offerings to deliver the best products and services and aim to become the airline of choice for all travellers.”

On awarding the 4-star rating to Hong Kong Airlines, Skytrax Chief Executive praised Hong Kong Airlines for continuing to offer a strong product on its regional routes, whilst also strengthening its global presence with the launch of new long-haul routes, meal concepts and service amenities.

Having successfully transitioned from a regional carrier into a global airline over the past year, Hong Kong Airlines now offers a growing network of nearly 40 destinations across Asia Pacific and North America, including Vancouver, Los Angeles and San Francisco – new routes launched over the past year. The airline has also introduced exciting new products, including its flagship lounge Club Autus, and the Airbus A350 aircraft.