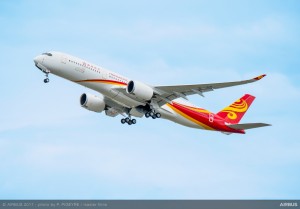 Hong Kong Airlines is offering all of its pilots transfers to other carriers as the firm tries to downsize amid a financial crisis that threatens to put it out of business. The struggling carrier, Hong Kong’s third largest, has offered secondments or permanent employment with Tianjin Airlines, HK Express, Hainan Airlines and Hong Kong Air Cargo, all subsidiaries or ultimately controlled by China’s HNA Group.

So far 57 pilots have taken up the offer, with Emirates stepping in to hire about a fifth to fly its Airbus A380 aircraft, the documents revealed. HKA, also backed by HNA, has been experiencing tremendous upheaval in recent months stemming from concerns about its finances. Numerous key figures have departed and doubts have been raised about the company’s ability to repay creditors and aircraft lessors.

An extra portion of pilots arose after the airline failed to take delivery of at least four new aircraft due to cash flow problems. An airline source said the company was “in excess” of 100 pilots, but Emirates earlier cited HKA as saying the surplus was 10 per cent. As of April 10, the total number of pilots employed by HKA was 626, which would make the surplus 62 if the 10 per cent figure were accurate. The memos said 57 pilots had already applied for transfers to various airlines. Some 13 opted for Emirates and 10 for HK Express, but Tianjin Airlines proved most popular with 21 applicants.