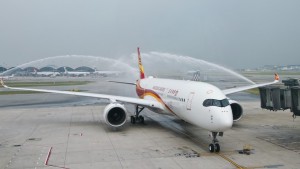 Hong Kong Airlines one of the major airlines in China is expanding its market in United States with affordable luxury flights.

Hong Kong is quietly becoming one of the world’s best airlines. It was recently ranked the second best regional carrier in the world, has a stellar on-time performance record and is rapidly expanding its long-haul service.

There are daily service between Los Angeles and Hong Kong (up from four days a week), is available for fares as low as $550 roundtrip for Economy seats while Business Class “Saver” fares start under $5,000 roundtrip (Business Class has fully reclining flat bed seats).

There is also non-stop service out of Vancouver, British Columbia. On March 25th 2018, it will launch service at San Francisco.

Later this year, this service will be introduced at New York’s JFK airport as well as at London’s Heathrow Airport.

The travellers from North American travellers will have access to Hong Kong Airlines’ network of more than 30 destinations in the Asia Pacific region.

To accomplish that, the company has made much advancement. It has relocated to a new concourse at the Hong Kong Airport that enabled it to get rid of the ferry buses that used to transport its passengers from one terminal to another.