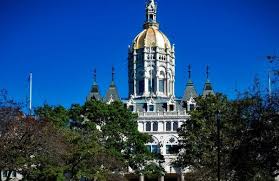 The cancelled vacations and business trips have brought the hotel industry in Connecticut to a halt during the coronavirus pandemic. Steve Matiatos, area general manager at Interstate Hotels and Resorts, which oversees hotels in Connecticut and Massachusetts said that for managers of hotels, this has got to be the toughest thing they have  ever experienced.

The hotel industry has been among the hardest hit since state officials began mandated shutdowns of certain businesses and crowd sizes, while public health experts have warned against travel. As a result, more than 220,000 people — either laid off or furloughed — have filed for unemployment claims. Those working in the hospitality field, which includes hotels, have been among the highest rate of those claims according to the state Department of Labor.

Connecticut Lodging Association executive director Ginny Kozlowski couldn’t confirm how many hotels across the state have closed, though the hotel trade group leader did estimate that each has had to lay off or furlough employees, or severely limit their hours. Among known hotels that have closed are the Homewood Suites in Hartford, the Crowne Plaza in Danbury, and the Hilton Garden Inn in Milford.