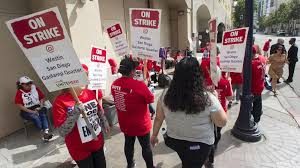 The vote by the downtown hotel’s housekeepers, banquet captains, servers and other employees represented by Unite Here Local 30 brings to an end a 35-day strike that union members authorized in hopes of securing improved pay and benefits.

Unite Here said the vote was 100 percent in favor of ratifying the new contract. In all, there are 162 workers at the Westin hotel who are Unite Here members. The San Diego strike was part of a nationwide job action involving 7,700 workers at hotels managed or owned by Marriott International across eight cities. In recent days, Unite Here reached agreement with hotels in Detroit, Oakland and San Jose, but some 7,000 workers still remain on strike in San Francisco, Boston, Maui and Oahu.

The Union leaders on Sunday declined to disclose terms of the new contract, opting to keep them under wraps until all remaining strikes have ended.

Brigette Browning, president of Unite Here Local 30 said that they are excited to reach an agreement for a strong contract that will change the lives of these brave and determined hotel workers and they are grateful for the over whelming solidarity from the workers.

Rachel Gumpert, national press secretary for Unite Here, has said that the terms negotiated by the local unions represent “historic progress” in the areas of working conditions, wages and benefits and job security. A spokesperson with Marriott International could not be reached for comment late Sunday afternoon. In San Diego, issues raised by the union included better pay and health benefits, increasing automation that could potentially jeopardize jobs, and so-called “green” initiatives that let guests opt out of having their rooms cleaned. In some cases, workers complain that such initiatives lead to hours being cut, and once guests do check out of those rooms, the union argues that there can be considerably more work involved to clean them. Workers at the Horton Plaza hotel had been without a contract since April of last year.