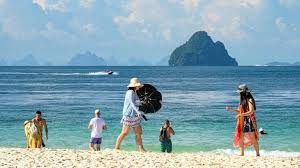 Hotels in Phuket have been forced to cut down prices with vacant rooms and sparsely populated beaches, as tourist chiefs find it hard to cope with a dip in Chinese visitors caused by the US trade war and a stronger baht.

Located on the Andaman Sea and popular for its beaches and nightlife, last year, sun-drenched Phuket was the most visited destination in the country after Bangkok.

Tourism accounts for 18 percent of Thailand’s gross domestic product and Chinese holidaymakers comprise more than a quarter of its total arrivals.

Claude de Crissey, Honorary Consul of France in Phuket and owner of about 40 rooms in the popular Patong Beach area, said that Chinese tourists are usually present even during the current low season.

“That was not the case this year,” Crissey said, and added that he had to lower prices by as much as 50 percent.

The problem is not just in Phuket, with hotels finding it tough to fill rooms in the seaside resort of Pattaya on the mainland and Koh Samui Island.

Trade tensions with the US have already made some Chinese tourists unwilling to take holidays owing to uncertainty back home, while the Thai baht has risen around 10 percent against the Yuan this year.

A boat mishap off Phuket’s coast that killed 47 Chinese holidaymakers has also put off potential tourists.

Adding to the woes is the fact that more than 3,000 new hotel rooms are being constructed on the island, and this giving rise to the question of who will fill them.

“In terms of business, it’s not good,” said Kongsak Khoopongsakorn, vice president of the association of hotels in Thailand and director of Vijitt Resort.

However, tourism authority chairman Yuthasak Supasorn said that he remained “optimistic”, and added, “We should reach our goal of 39.8 million foreign visitors” this year.