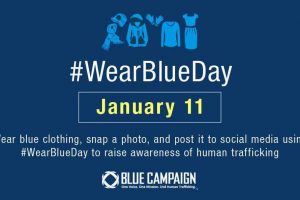 The Houston Airport System and its airline partners are teaming with U.S. Customs and Border Protection and the Department of Homeland Security on Friday, Jan. 11, 2019 in wearing blue to raise awareness on National Human Trafficking Awareness Day.

Staff at both George Bush Intercontinental Airport and William P. Hobby Airport will wear blue shirts and other blue apparel on Jan. 11 to show support for the DHS Blue Campaign against human trafficking.

As part of the efforts to raise awareness of human trafficking, the public also is asked to participate by taking photos of themselves, friends, family, and colleagues wearing blue clothing and sharing them on social media channels, posting with the #WearBlueDay hashtag.

DHS estimates that human trafficking is a $32 billion per year industry, second only to drug trafficking as the most profitable form of transnational crime.

The Blue Campaign is the unified voice for the U.S. Department of Homeland Security’s efforts to combat human trafficking. Working in collaboration with law enforcement, government, non-governmental and private organizations, the Blue Campaign strives to protect the basic right of freedom and to bring those who exploit human lives to justice.