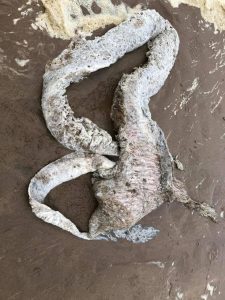 People have been left wondered after the discovery of a huge sea creature on a north Devon beach. One Richard Walden has made this discovery on Woolacombe beach on Saturday. Richard posted the pictures of his new finding on the Facebook group- A place in North Devon-asking if anyone had any idea about the new creature. He wrote in his post that the creature was up to 3 metres long and he suspected it to be a type of squid or octopus.

While some suggested that it was an eel, some suggested the photo might be of whale intestines and even an alien. This is not the first bizarre discovery on a north Devon beach though. Earlier during the summer, a blood-sucking sea lamprey was also found on Exmouth beach. Lamprey is usually found in Spain and Portugal and its number is supposed to be dwindling due to the growing pollution in rivers. It uses its sharp teeth to latch on to big animals to feed on their blood.

At Hartland Abbey beach, a heaving mass of red goose branches was found. They are rarely found in large numbers on the shore but their stems can be eaten and treated like expensive food in Spain and Portugal.

Earlier this year in August, when Harrison Lambert was walking alongside Instow beach, he found the charred and decomposing remains of a mystery creature. The remains were initially believed to be of a dolphin or porpoise and it was mostly found in a burnt state. The remains of the mystery creature were found covered in some tar-like substance. In 2009 also, the corpse of a creature was found washed up on Croyde beach. Speculation was rife at that time that the corpse belonged to an Exmoor beast but the creature was later assumed as a rotted seal.