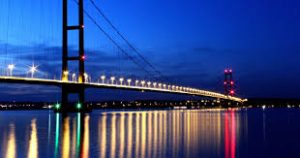 UK’s first musical road, Humber Bridge will become a  major tourism attraction. It is a part of £30 million plan for travel and tourism.

A 12-year vision which also includes thrill rides to the top of the towers and virtual reality experiences has been approved by the bridge board and the master plan.

Under the plans, the next few years would see musical rumble strips fitted to the bridge to play a tune as cars drive over, making it the first road of its kind in the United Kingdom.

The bridge’s north tower could be opened up to hard-hat tours with spectacular views over the Humber as soon as next year. There are possible future developments which could also see a “thrilling ride inspired by a wind turbine”, cradle rides beneath the carriageways and rides over the suspension cables.

And virtual reality technology is also to be introduced to enable every part of the bridge to be explored without actually being there. The bridge board officials say the scheme would be self-funded from the start, with ongoing work paid for using revenues generated by the attraction itself, not from toll fees.

Other future developments outlined in the masterplan, which would be delivered in four phases, include a visitors’ centre and an engineering-themed park and play zone. Opening the north anchorage to the public for the first time is also included in the masterplan, with concerts and performances to be introduced there. And fitting LED lights to the underside of the road, showing the bridge’s curve, is another part of the development plan.

The bridge board has forecast the project could generate up to £29 million for the local economy over the 10-year development period, then £4 million per year after the scheme is complete.

Councillor David Watson, chairman of the Humber Bridge Board, said the plan was exciting news for the region.