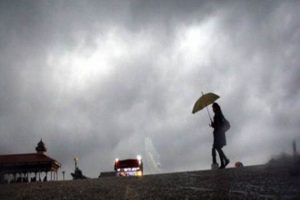 Indian Meteorological Department (IMD)  issued a press release which stated  that Cyclone Fani was likely to hit the state of Tamil Nadu and Puducherry  over two days and heavy rainfall was also expected.

According to the alert rainfall at most places with heavy to very heavy falls at a few places with extremely heavy at isolated places is expected during the two days span.

In other southern states like Kerela heavy rainfall is predicted with depressions forming in the Bay of Bengal. From Friday strong winds are expected while a ‘yellow alert’ has been issued for Ernakulam, Idukki, Thrissur and Malappuram on April 29.

Tamil Nadu Weatherman, Pradeep John said that slowly consensus is coming in from all numerical weather models. The ridge building up will block the cyclone going away… As the forecasted cyclone is expected to stall because of the ridge, this is going to dump lots and lots and lots of rains where ever it is going to cross and surrounding areas. Droughts to floods can happen in some areas, if this going to cross Tamil Nadu.