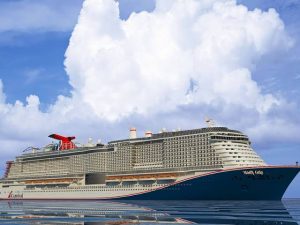 By two months the debut of Carnival Mardi Gras has been delayed so Carnival Cruise Line is forced to delay and the ship which  has been pencilled in to debut on August 31st next year will not take to the water until November 14th.

There is a loss of eight planned itineraries and the cruise line said that it had taken the decision after a notification from the Meyer Turku shipyard where the vessel is being built.

So far the European, transatlantic and New York-based itineraries, as well as four Port Canaveral itineraries, have been cancelled.

After the notice by Meyer Turku the guest notification process began promptly so that the impacted guests could make alternative plans.

Carnival is offering guests 25 percent future cruise credit apart from the full refund of their cruise fare. It is also assisting with non-refundable airline and hotel reservation already booked.

Ben Clement, Carnival Cruise Line senior vice president of newbuild said that they have been working closely with Meyer Turku executives to keep the Mardi Gras delivery on schedule, and while they deeply regret disappointing their guests, this change in the delivery date is required to make sure all of the ship’s systems, features and technology will be fully operational, so that they can give guests the vacation they expect.