Increase of number of flights from Mysuru boosts tourism 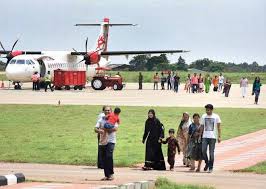 Increase of number of flights from Mysuru, up from one to seven, in the last six months, has propped up air connectivity to the City of Palaces, surrounding tourist spots. It is expected to provide further boost to the tourism sector and industries to surface in the region.

TruJet introduced the Chennai-Mysuru-Chennai flight which is the second flight to Chennai considering the high originating air passenger traffic to that sector. With this, Mysuru has two flights to Chennai – a morning and an evening flight, besides air services to Goa, Hyderabad, Kochi and Bengaluru.

R Manjunath, Director, Mysuru Airport said, “There is no looking back now as flight operations have gained tremendous traction since last few months and airline operators are convinced of the passenger potential.”

Few more air routes are being explored and could happen this month and that include Mysuru-Tirupati and Mysore-Belgaum-Shirdi.

Stakeholders in the tourism and hospitality sector are confident that this will provide a impetus to the travel industry, and Mysuru’s economy to a large extent depends on it. The city witnesses around 3.5 million tourists per year on a conservative estimate and of them, 90 per cent are domestic travellers.