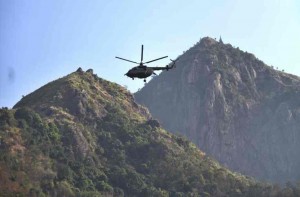 Indian Air Force and multiple disaster management teams joined to rescue more than 100 people stranded at a waterfall in Maharashtra amid torrential rainfall.

There are several picnic-goers who were stranded at the Chinchoti waterfall, a popular tourist spot in Tungareshwar hill range at Vasai in Palgarh district of western Indian state Maharashtra, after heavy downpour lashed the state and its capital city Mumbai.

The local police force, fire brigade, disaster management cell and National Disaster Response Force (NDRF) personnel sprung into action after they got information about picnickers being trapped at the tourist spot, a spokesperson of the Palghar police said.

The local agencies rescued 97 people, but were not able to reach some of the stranded people due to the dense forest and hilly terrain. The IAF was called in to help with rescue operations. Braving the rough weather, the IAF personnel searched around the waterfall in a helicopter and spotted five people, including three women, stranded at a hilly spot last evening. All the five people were rescued by the IAF and flown to the Mumbai airport, he said. A 35-year-old man from suburban Kandivli was swept away yesterday by strong currents in the waterfall, the police had earlier said. The rescue operation was later called off after there was no report of any person stranded or missing in the area, a senior police official said.