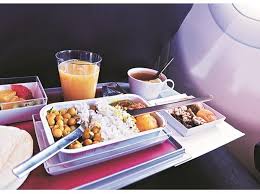 The low-fat meal for the crew will be devised on day-wise basis, in order to provide light and healthy meals for the staff members along with a homely feeling.

The initiative to revise the in-flight food menu for the crew was taken, after considering the “health factor” of the crew members.

New changes in the in-flight menu for crew members would come into effect from Sept 15 midnight, on all domestic and international flights, a top “Air India” official was quoted as saying.

Tags: Air India to Launch, Low-Fat Meals for its Crew