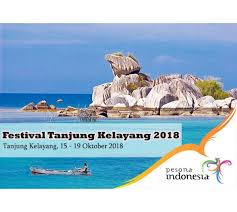 The tourism festival is part of the Top 100 Calendar of Events of the Wonderful Indonesia 2018 national tourism campaign. It features a series of activities in Tanjung Kelayang, a newly appointed special economic zone,

A variety of programs will be held during the festival like the Rainbow of Culture parade, a regional batik fashion show and a collaborative traditional-contemporary music performance. Visitors can also take part in a beach clean-up, a travel vlog contest, a geopark seminar and a culinary festival, the Jakarta Post reported.