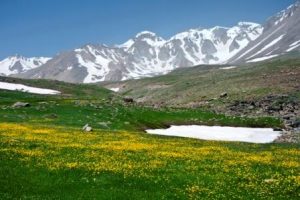 Tourism authorities of Ardabil province in North-western Iran have recently decided to attract more tourists during the winter season. The authorities are planning to develop methods to promote winter tourism by launching three new ski resorts according to the latest Iranian calendar year which began on March 1.

Authorities have decided to launch resorts in Owjur of the Sareyn County, Shabil in Meshgin Shahr, and Alvaresi in Sareyn County. On Saturday, Nader Fallahi, Provincial Tourism Chief said in a press statement that to establish a balanced development of the tourism industry in Ardabil, the prosperity of winter tourism and the removal of the province from being a seasonal tourism destination is one of the most important programs that need to be undertaken.

Ardabil is recognised for its lush green natural bounties and the hospitable people. It is located over a high windswept plateau at an altitude averaging 3,000 meters above sea level. The province is also known for its silk and carpet trade tradition. It is home to the UNESCO-registered Sheikh Safi al-Din Khanegah and Shrine Ensemble.

Every year thousands of tourists flock to the province, especially during winter. The region gets very cold in winter and mild in summer. The capital city of Ardabil is usually recorded as one of the coolest cities in the country during winter.

For a relatively long time, Iran has been considered as an international destination for avid powder chasers during the winter season. The snow-capped mountains situated above Tehran have some of the best ski resorts in the world. These resorts can enable guests to enjoy Iranian hospitality at its finest. The new resorts would certainly be a valuable addition and attract more guests in the winter season.