IRCTC to begin its Dakshina Bharat Darshan tour from January 3, 2020 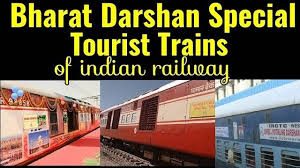 The tariff has been fixed at INR 7560 (per person) for SL (sleeper class) and INR 9240 for AC 3 Tier. Also, government employees can avail the LTC facility for the trip. The boarding points for this tourist train will be at Secunderabad, Warangal, Khammam, Vijayawada, Ongole, Nellore and Renigunta.

Besides Bharat Darshan, IRCTC has also announced two international flight packages for the convenience of travellers from Hyderabad to Dubai and Colombo. The package, named The Splendors of Dubai, will start from December 2 and end up on December 6. This 4 nights and 5 days package will cost INR 70,010 for single occupancy per person, and INR 62,400 for double occupancy.

All the above mentioned packages cover air ticket fares (to and from), accommodation with breakfast, visa and other fees.