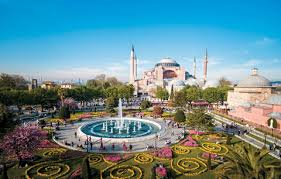 The Yenikapi Cruise Port Project in Istanbul will become operational soon, Turkey’s transport and infrastructure minister said on Tuesday. Istanbul will be the starting and finishing points in cruise tourism after the port becomes operational. The cruise tourism constitutes 2% of world’s total tourism. The cruising in Turkey grew 23% on average annually from 2003 to 2009. Now, this country aims to attract 3-million cruise passengers every year.

Istanbul has named as the world’s eighth most visited city in 2018. Istanbul recorded its best numbers in the last five years by hosting nearly 10 million foreign tourists, 9.9 million to be precise, from 200 countries as of August this year.

According to the Istanbul Provincial Directorate of Culture and Tourism, the tourism figure was up by more than 1 million compared to the last year’s eight-month period when some 8.9 million foreigners visited the metropolis.

There are many transit passengers in tourist groups have been touring around the city as well. Most prefer to visit Istanbul’s historical and touristic sites instead of waiting at the airport. National flag carrier Turkish Airlines (THY) also provides a free stopover service for transit passengers staying in Istanbul for over 20 hours until their connected flights. The  carrier has also attracted many transit passengers to Istanbul with its free accommodation services, which was launched in March 2017 for passengers from Pakistan to attract more flyers and to support Istanbul’s tourism.

THY’s transit passengers with over 20-hour waiting periods can use hotel vouchers provided while booking their flights. With these vouchers, economy passengers can stay at a 4-star hotel for one night in the Sultanahmet and Taksim areas, while business passengers are provided with a two-night stay at a five-star hotel.