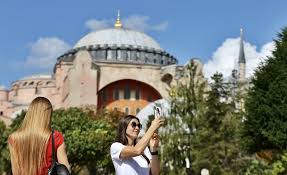 To tap the rich culture potential of the largest city of Turkey tourism platform was launched in Istanbul on Monday. This will be jointly run by different commissions, non-governmental organistaion, tourism representatives and groups.

Mayor Ekrem Imamoglu said at the first meeting of the platform said that they have begun their work to improve the tourism potential of Istanbul, which attracts visitors from all over the world every year with its unique natural landscape, deep-rooted history and rich culture.

He felt that the comprehensive efforts under the platform would make Istanbul a powerful city that can easily compete with rival destinations.

During the first nine months the tourists arrivals in Istanbul increased by 12 per cent year-on-year to 11.3 million. This was according to the latest figures of the Ministry of Culture and Tourism.

Cumhur Guven Tasbasi, the coordinator of the platform mentioned that the number of tourists to the city is expected to hit 14 million at the end of this year, but the revenue is not growing as expected.

After the severe terror attacks, political uncertainty and bad relations with some European states over the past years Turkey’s tourism industry is rebounding.

The average room price and average spending of tourists in Istanbul has gone down and their staying period are shorter than in the other destinations like New York, Paris and Rome.

Kaya Demirer, chairman of the Turkish Restaurant and Entertainment Association mentioned that the organization would work with the platform to transform the city into a gastronomy hub.