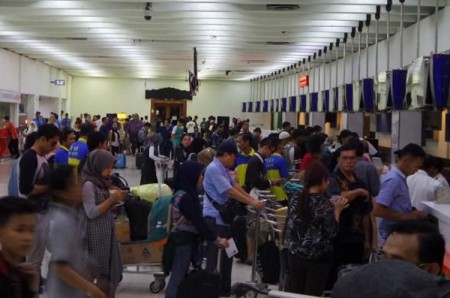 The Transportation Ministry of Jakarta has mentioned that the number of passengers commuting via air would be increasing by nearly 10 to 11 percent during the long holiday of Idul Fitri.
This projection was based on the number of airline seats sold during the ‘mudik’ or exodus period as per Agus Santoso, who is the director general of the air transport ministry.
He also went on to assert that the total number of airline passengers would reach 5.9 million or would rise by almost 10 percent to 11 percent compared to last year.
Agus said airlines posted the highest number of passengers of all transportation modes during the Idul Fitri holiday this year.
He pointed out to the fact that a shift in trend had occurred during this year’s Idul Fitri mudik as the peak period was last Saturday or six days prior to the celebration on Friday. Last year the peak period of mudik had taken place just two days before the festivity, he added saying that the changing trend was an end-product of longer collective holiday this time.
The government in May decided to maintain its joint ministerial decree (SKB) decision, which set the collective holiday starting from June 11 to  20 despite protests from employers and also Indonesia Stock Exchange (IDX) as it might disrupt economic activities.
However, Coordinating Human Development and Culture Minister Puan Maharani said a longer holiday could help improve traffic flow, which usually witnessed heavy congestion, as well as provide enough time for people to spend with their families.