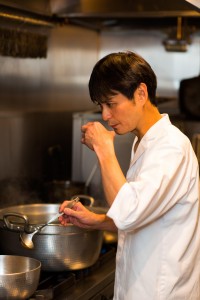 JAL will continue to create meals that provide an exciting inflight experience for our valued customers.

Menu from June 1-15, 2018 & September 1-15, 2018
Main Dish: Beef Bowl with Sesame Sauce
Side Dish: Squid and Taro Stew
Japanese style boiled spinach with ginger flavor
*May be replaced with a salad
Dessert will be served on the side.

Chef Masahiro Kasahara （Sanpi Ryoron）
After working at Shogatsuya Kiccho for nine years, he inherited his father’s restaurant “Torisho”, a yakitori restaurant in Musashi-Koyama, Tokyo. The restaurant was closed after celebrating its 30thanniversary. In 2004, Chef Kasahara opened his own restaurant Sanpi Ryoron in Ebisu, Tokyo. With its creative and original dishes, the restaurant immediately became the talk of town where reservations are highly recommended.

In 2013 Chef Kasahara opened Sanpi Ryoron Nagoya and in 2014 opened Sanpi Ryoron Mens (currently known as Sanpi Ryoro Hanare) in Hiroo, Tokyo. Being the representative for Washoku School Lunch Project in East Japan, he is also active in dietary education and promoting Japanese food. He has written cookbooks from basic to specialized Japanese foods. During his personal time, he enjoys spending time with his three children.