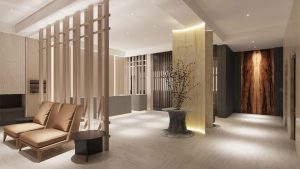 The Japan-based Prince Hotels opened its first international hotel under its five-star brand “Prince Akatoki” in London this week. This is the first hotel of the Prince Hotels in Europe.

To ensure that the London-based hotel extends the Japanese flavour, the hotel’s general manager Ray Geotz had spent time with the company officials in Japan while a Japanese chef was flown over to the hotel to train the staff. The hotel, on Great Cumberland Place near Marble Arch, has a great décor with fusuma panel- inspired wall hanging, a quite common feature in Japanese interiors.

The London-based hotel has as many as 82 rooms. The hotel giant is all set to open its properties in Paris, New York, Singapore and Bangkok in the coming days. Prince Hotels has its properties across multiple brands in Hawaii and Taiwan outside Japan.

According to the president of Prince Hotels, Masahiko Koyama, London happens to be one of the top destinations for tourism and business in Europe and it is also the major financial centre. “Thus, it is a rare opportunity to start a hotel here and we are honoured to have started our new luxury brand here,” he said.

That he was not worried about overcapacity in the capital and also did not fear the fear of Brexit on the market, he claimed. “We believe that business and tourism will continue to thrive in the UK in the coming days and I don’t think there are any issues as such that would affect our business.”

Prince Akatoki features design by London-based B3 designers; Tokii, a seasonally Japanese- inspired restaurant besides The Mault Lounge & Bar, which will feature of a large range of Japanese teas during the daytime and whiskies and shakes during the night hours.