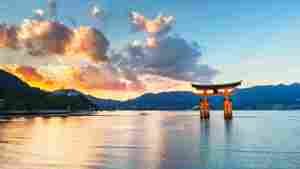 The island Miyajima, also known as Itsukushima, is a short ferry ride away from Hiroshima and a popular day trip site for visitors to the area. Now the Japanese government is imposing tourist tax.

It is known for its orange torii gate, a popular photo spot due to the fact that it appears semi-sunken at high tide, and for the 12th-century Itsukushima Shrine.

Taro Matsumoto is the newly elected mayor of Hatsukaichi city, which is in Hiroshima prefecture. He ran on a successful campaign issue of a tourist tax.

At a press conference, Matsumoto told reporters that “it is necessary to secure new financial resources in order to continuously maintain quality of the Island as a tourist spot,” and that he hopes the tax will be implemented by spring of 2021.

There are three possible methods for impsong and collecting the tax: charging each visitors traveling by ferry, increasing the tax for the ferry operators or charging tax to directly to the visitors when they use facilities on the island.

Japan is currently in an interesting state of flux. Foreign tourism has skyrocketed ahead of Tokyo’s hosting of the Olympic Games in 2020, while the population is both aging and urbanizing, leaving more rural areas of the country struggling to catch up.

Miyajima is not exempt — the island has an issue of aging population and faces a tax revenue shortfall.

And Miyajima is far from the only destination adding or considering a tax on tourists.

Several destinations throughout Asia, coping with the long-term effects of overtourism, have levied additional fees to help pay for the damages incurred by millions of visitors.

Bali, a hugely popular tourist spot, announced in 2019 that they were considering a tourist tax to help pay for local environmental efforts.

Also in Indonesia, Komodo Island — home to the famous Komodo dragon — is still working out a system to strictly control the number of people allowed to visit the island and how much to charge the ones who are permitted access.

European destinations are adding or increasing tourist taxes as well.

In September 2019, Amsterdam voted to increase hotel taxes by about $3 per head per night, resulting in the highest tourist tax on the continent.