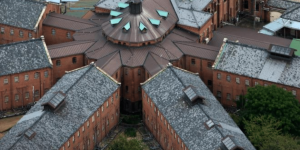 The historic jail in Japan, Nara Prison which was previously declared as a cultural asset in Japan, is set to reopen in 2021 as a luxury hotel in a project seeking to change the area’s image of an express tourist destination. The prison complex is situated in Nara city in Honshu Island. It is the largest in the Japanese archipelago – was constructed between 1901 and 1908 and officially opened in 1909.

The Romanesque red-brick construction is the only prison that remains intact of the five built by the Meiji government (1868-1912) with the aim of modernizing the country’s correctional facilities.

The Japan tourism gave great importance to the prison and displayed a model of it at the British-Japanese Exhibition in London in 1910 to show the modernization of the country, which had remained virtually isolated for over two centuries.

Nara prison, which has an area of some 106,000 square metres, was extended in later years up to its current size. It was used as a juvenile prison from 1946 until its closure in 2017, when the authorities began to look for operators to reinvent the complex.

Nara Prison will be the first prison in Japan to be converted into a hotel, something popularized in western countries, citing Catherine Peng of Hoshino Resorts – the hotel chain that will operate the complex.

This massive hotel project was assigned to them in January this year and much detail remains to be decided, although the concept is that of a luxury hotel, which will allow for the recovery of renovation costs and the generation of revenue.

According to the project’s original estimations by the Justice Ministry, renovation costs could exceed 15 billion yen (around $136.6 million). An early draft of the renovation plan showed that the hotel will have a few dozen rooms, the storage areas and rooms used by the guards will serve as common areas.

Hoshino Resorts said that although converting a prison with more than 100 years of history into a hotel could be a challenge in preserving its heritage value, they also see it as an opportunity “to improve Nara’s tourism”.

Nara Prison, which served as the capital of Japan in the eighth century, is known for its deer that roam its streets and parks, attracting tourists who make just a day trip to see the animals and attractions like the bronze Buddha at Todaiji temple and Kasuga Taisha shrine.