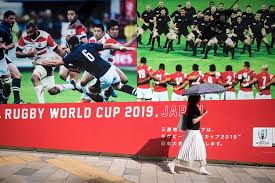 A recent research has unveiled that the Rugby World Cup, (RWC) has fuelled a major boom in the tourism of Japan from the competing nations. During the timeframe between 12th September to 6th November, which covers the tournament dates and a few days either side, flight bookings to Japan from the vying countries are at present 38.1% ahead of where they were, during the same time in 2018.

The day before the opening ceremony witnessed the highest peak with bookings from the competing nations getting double those on the equivalent date in 2018
To quote Olivier Ponti, VP Insights, ForwardKeys, “When we analyze these visitors in more depth, we see that their average length of stay is 11.7 nights. That tells us that few people are coming to watch a specific game and then returning home; the majority are making a holiday of their visit.”

The boost in RWC tourism is most powerfully demonstrated by visits from Ireland, which is not Japan’s mainstream tourism market without any direct flight connections. Bookings for the period, 12th September to 6th November, are at present 500.3% ahead of where they were at this time last year.

The average length of stay is 12.7 nights. This indicates that Irish tourists, having made the journey (the minimum flight time is 13.5 hours from Dublin to Tokyo) are also choosing Japan as their preferred vacation destination.

There are very clear booking spikes around the dates when the Irish are playing their matches, which also happen to be weekends.