Jet grounding boon for others as AI, Spice line up to take its slots, lease planes 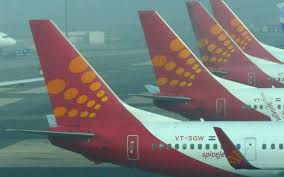 The unfortunate grounding of Jet Airways has turned out to be a boon for other airlines. The suspension of its flights has not only freed up slots at the choked Mumbai and Delhi airports, but also opened up an opportunity for rival airlines to take Jet’s idle aircraft on lease.

The government will allot 280 slots at Mumbai and 160 at Delhi as well as those at other airports to Indian carriers for the next three months. Airlines that can induct more planes quickly and tide over the sudden shortage ahead of the peak summer travel season will get more slots.

SpiceJet has taken on lease a large number of Boeing 737s that lessors repossessed from Jet to tide over the shortage caused by the grounding of its B737 Max. On Thursday, SpiceJet said it would “induct six more Boeing 737-800 NG aircraft on dry lease in addition to 16 B737s and five Q400s. The total number of planes to be inducted in the immediate future now stands at 27”.

The airline also announced 24 new flights connecting Mumbai and Delhi with other Indian cities. Of these, 20 will connect Mumbai with other cities, including Delhi.

On Thursday, even as the government asked airlines to charge reasonable fares, AI announced “special stranded fares” for passengers of Jet’s cancelled flights who are stuck abroad. The special fares will apply to some flights from London, Bangkok, Singapore, Hong Kong and Muscat to Mumbai and Delhi.

“Seventy-five planes used on domestic routes have gone out of the system (mainly due to Jet grounding) while other Indian carriers have brought in 58 planes in last five months. The drop in capacity currently is 17 planes. Other airlines have told us they will induct 31 more planes in May, June and July as per normal induction plans and they may get leases for another 20-plus aircraft. We have requested all airlines to expedite induction of aircraft as summer demand for travel is very strong,” said aviation secretary P S Kharola after meeting both airline and airport operators during the day.

The slots of Jet Airways will for now be given for three months and if Jet’s revival does not happen in that time, the slots will be extended for a month at a time. “Some airlines are in talks to lease Jet’s wide body aircraft also,” Kharola said, adding Jet has been asked to give details of the refunds it has to give to passengers and its plans and time-frame for doing so.