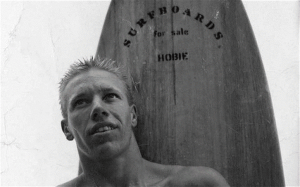 A new exhibition featuring Hobart “Hobie” Alter, a Southern California native known for inventing the “Hobie Cat” catamaran and changing the way people use the water for surfing and sailing is on display at John Wayne Airport (JWA). Ticketed passengers can view the exhibit through Spring 2019.

“Hobie Alter had a major impact on the local and worldwide surf and ocean watersport culture of today,” said Orange County Board of Supervisors Chairman Andrew Do. “With 42 miles of breathtaking beaches and home to many national surf and watersport competitions, Orange County residents and visitors alike will enjoy this exhibition celebrating the countless ways that modern surf culture reflects Hobie Alter’s influence.”

Passengers strolling through the Vi Smith Concourse Gallery located on the Departure (upper) Level, across from Gates 2 through 5 in Terminal A, Gates 18 through 21 in Terminal C and in the free-standing display cases across from Gate 14 will have the opportunity to view fun and interesting panel displays depicting Hobie’s achievements.

The exhibition includes photographs and memorabilia celebrating the lifetime achievements of a watersports pioneer.  Summarized descriptions of some of the displays include: