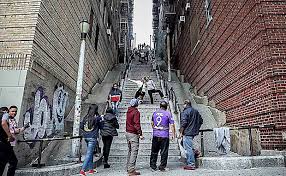 Gangnam Style and the Kiki Challenge went viral on social media earlier, and now, another step is grabbing attention – courtesy, the Joker. He may have painted a gritty, grim figure on screen with his red pant suit and face paint, but perhaps little did this character from the film know then that he would inspire hordes of people to imitate his act. In the movie, the Joker, called Arthur Fleck (Joaquin Phoenix) is seen dancing and throwing his limbs wide in wild abandon, as he goes down a flight of steps, with his clown make-up on. The scene has become so popular that fans of the character are now flocking to the same outdoor location in the Bronx, New York to try and mimic the scene, step-for-step.

Neighborhood people, who use the stairs for daily commute, now have to avoid them because of the tourists trying to recreate the scene there. The stairs are also inviting memes and many fans are arriving there just to take a photo on the famous steps. The pose and hashtag #JokerStairs is rampant on Instagram with thousands of posts.

The Joker Stairs are not the only movie tourist attraction. The 72 stone steps at the entrance of the Philadelphia Museum of Art are called ‘Rocky Steps’ after a scene from the film. Tourists drop in here racing up the stairs, arms raised in victory.