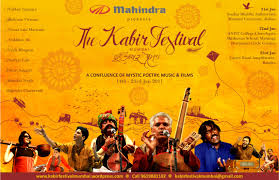 The Kabir Festival Mumbai turns 10 this year! This one of a kind community funded, volunteer run festival celebrates the all-embracing message of universal love and harmony through the music and poetry of mystics and visionaries of India.

To mark the decade long run, the Festival brings 23 diverse events over a period of 10 days. The events include, music, films, musical dastans and workshops, spread over numerous venues across Mumbai.

As always, all the events of Kabir Festival Mumbai are free and open to all.

This exciting edition of the Festival brings: