At Kansas City International Airport a Delta flight slid off 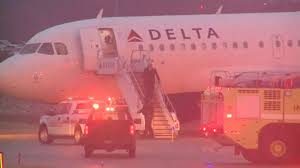 On Friday morning at Kansas City International Airport in Missouri a Delta flight slid off the pavement while taxiing from the airport terminal. The Delta Flight 1114 nose wheel dropped off the taxiway pavement confirmed the spokesman Joe McBride. The flight was earlier identified as the bound for Detroit and by a different number.

Passengers and the crew had no injuries and the plane remained disabled on the airfield after those onboard were safely taken back to the terminal.

The crew will remove the aircraft and it did not impend much of the airfield.

Martha Whitt said that in preparation for departure, the nosegear of Delta flight 1114 exited the taxiway and apologized the customers for the delay and inconvenience and working to reaccommodated.

Due to the slick conditions the airfield was closed Friday morning while deicer was applied and after noting the closure was unrelated to the flight going off the pavement it was reopened shortly before noon local time.

According to the National Weather Service a significant round of freezing rain was heading towards the metro Kansas City.