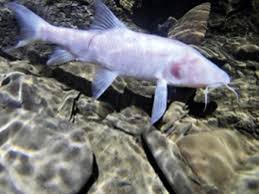 Researchers discovered the world’s largest cavefish in Um Ladaw Cave Northeastern India. Biologist Daniel Harries discovered the fish which weighed 10 times more than  any other species on record and was a foot and a half in length during a research expedition in the year 2019.

The biologist predicts that the fishes must be on the verge of evolving into a new species adding changes that will allow scientists to have a better understanding the process of evolution.

There were many questions fanned by the discovery like the food source for the fishes and how they adapted with time to sustain themselves in the underground water caves.

The cavefish is blind and eyeless but have the ability to sense light and the cave in which the fishes were discovered is located in Meghalaya.

Harries said that the team saw the fishes swimming in a pool and due to the size he had to adopt another method to catch the fishes.

The reports predicted that the fish probably fed on vegetation washed inside because of the consistent downpour but the source of sustenance was still a mystery.

Owing to difficult conditions the research team did not weigh the fishes.

Two Indian scientists, Rajeec Raghavan and Neelesh Dahanukar will work along with the research team to sequence the fishes, genetic sequence  to reach a conclusive decision if it was a new species or not.

The team took a few live fish and fragments of their fins to be analysed in their laborartory in 2020.

The cave fish is related to the surface fishes known as the Golden Mahseer ( Tor putitora).

In the riverine pools the endangered species of Cyprinid fish are mostly found in the rapis streams located in the Himlayan region.

The differences between both the animals is that the cavefish lacked pigmentation in their biological structure and their eyes were poorly developed.