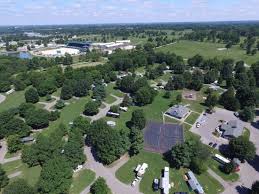 The Republican lawmakers in Kentucky want to borrow $150 million to fix up the Kentucky park system, starting with a $20 million infusion on July 1 amid what is expected to be a contentious race for governor. This will boost the eco-tourism of the state.

The House Appropriations and Revenue Committee approved House Bill 268 on Tuesday. It would authorize the Arts, Tourism and Heritage Cabinet to borrow and spend $20 million beginning July 1 to do things like replace roofs and expands campgrounds at state parks.

This plan to fix the park planning would cost taxpayers an extra $2.2 million in the fiscal year that begins July 1. The rest of the money would be paid back over about 20 years, according to committee chairman Steven Rudy. Rudy said the plan is part of a larger proposal to borrow $150 million and spend it over the next three years to repair the state’s park system. He said the request came from the administration of Republican Gov. Matt Bevin, who is one of three governors in the country up for re-election this year.

Representatives from Bevin’s office did not respond to a request for comment. Kentucky has 49 state parks. Some are resorts, with hotels, restaurants and golf courses. The Bevin administration has already spent $18 million in repairs as part of its “Refreshing the Finest” program, which included 133 projects. Bevin announced an additional $20 million investment earlier this month, which had been approved by the state legislature last year.

Kentucky have some hidden gems in the state parks and they have been lagging behind for quite some time,” Rudy said. Hopefully they are going to be able to move into this century with our state parks with this investment. But the increased spending comes as lawmakers want to make changes to the state’s tax code. The committee also approved House Bill 354, which would exempt most nonprofit organizations from collecting sales taxes on admissions. That would include tickets to University of Kentucky and University of Louisville sporting events.

If that bill passes, it would cost taxpayers $7.75 million. Plus, the legislature is debating a school safety bill that would add millions of dollars to state spending in 2020 — money that has yet to be allocated. But Rudy said the state would make money over time, when including other changes that would collect sales taxes on products sold online. He also said the state’s reserves would be enough to cover the losses.

Rudy said the House could pass the bills Thursday. Lawmakers need at least 60 votes to pass them because they are revenue bills in a year when lawmakers don’t normally approve spending.

But Republicans control 61 of 100 seats in the House of Representatives. House Bill 354 seemed to surprise some Democrats on the committee, including Rep. Ruth Ann Palumbo, who noticed other things the bill does like decreasing the property tax rate on some heavy equipment.