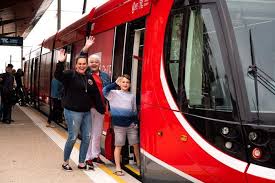 Canberra launched light rail officially on April 20 with approximately 25,000 people hopping on board for a free ride. Ten vehicles were deployed on the day, running 130 trips and covering 1,560 kilometres.

The City and Gungahlin terminals came to life with live music, kids’ entertainment and barbecues for people waiting to ride. Typical waiting times were between 15 – 25 minutes and passengers were excited and well behaved, with no major incidents to report.

More than 8,500 sausages were cooked during the launch event and a team of 190 friendly volunteers were at hand to provide information on using the light rail and updates on the future of light rail construction.

Minister for Transport Meegan Fitzharris said the passenger experience will keep getting better as drivers get used to taking passengers and journey times and frequency continue to improve.

Fitzharris said, “The Gungahlin to City route is the first stage of a broader program to connect Canberra’s town centres.

“The launch turnout shows how invested the community is in the future of Canberra. While light rail is a new concept for many people, the positive feedback we’ve received tells us that we are on the right track in improving the connectivity and liveability of our city. Canberra is now better connected with the light rail route from Gungahlin to City, and this work now continues with the second stage of light rail – City to Woden.”