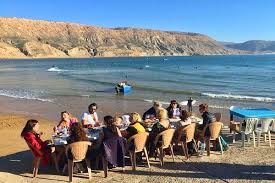 Among the tourists who visited Agadir, capital of the Souss region in southern Morocco, domestic tourists topped the list.

The flow of domestic tourists to the city increased during the month of August, media reported.

The Regional Council of Tourism in Agadir said that Moroccans spent 324,729 tourist nights, an increase of 10.27 per cent compared to the same period last year.

The regional tourism office said that French tourists came second, with 124,499 nights against 123,926 during the same period last year. Arrivals of French tourists saw an increase of 0.46 per cent.

British tourists came third with 74.499 nights and an increase of 7.6 per cent compared to last year.

The data added that Morocco recorded 1.84 million arrivals of French tourists, registering a growth of 14% compared to 2017.