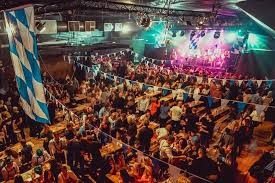 Vegtoberfest, the UK’s first vegan Oktoberfest celebration, launched in October 2018 with a raucous sold out show at Camden’s Fest venue. This pioneering plant based extravaganza is returning with two festivals for 2019 on Saturday 12th and Saturday 19th October.

Oktoberfest is a beer festival first and foremost and Vegtoberfest is just that. Vegan-friendly Bavarian beers such as Spaten, Lowenbrau and more will sit alongside a handful of local vegan craft ales, while vegan wines, mulled wine, hot and cold cocktails and vegan Baileys will also be available.

It wouldn’t be an Oktoberfest celebration without Bratwurst so Vegtoberfest has drafted in Camden’s leading vegan street food specialists Rudy’s Dirty Vegan Dinner.  They will be serving 100% vegan, Bavarian Wiesswurst, Bratwurst and Bockwurst sausages with all the usual trimmings. They’ll also be serving their infamous vegan Dirty Burger with baycon, fried onion, cheese, lettuce and pickles and German potato pancakes aka kartoffelpuffer.

Vegtoberfest will also make use of the Fest’s Birdcage restaurant which will be transformed into a vegan diner serving stone-baked vegan pizza, loaded fries, pretzels and vegan ice cream.

Fest Camden’s main room will be transformed into a marvellous festival-themed beer hall where guests can enjoy their beers while live music from the amazing Old Dirty Brasstards (on 12th October) and Brasstermind (on 19th October) plays out on stage.

London’s leading cabaret star Dee Riley will be hosting the evening and treating the crowd to his infamous stage magic and comedy routines. Guests can also enjoy food and drink from the Wonderfest Rooftop with its views over Camden Stables Market and groups can book one of the venue’s famous Party Stables.