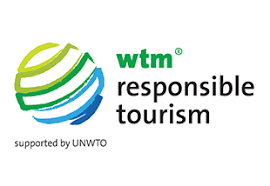 More than 50,000 representatives from all over the globe attended the World Tourism Mart in London to debate and discuss what’s hot in the travel and tourism sectors.

India, one of the world’s oldest civilisations attracts millions of travellers every year due to its history and culture. Stretching from the Himalayas to the tropical forests in the south, India’s a bucket list favourite.

“It’s not about finding new products, it’s about re-discovering them and showcasing to the world,” says Rupinder Brar, the additional Director-General of the Ministry of Tourism, Government of India.

“We have a lot of nature, wildlife. We have the hills, the mountains, the trekking, the rafting, the rivers. And the spirituality that comes with India. And we have the figure of Mahatma Gandhi who we don’t want the world to forget. He’s the ambassador of peace.”
Climate change is a big issue right now and many travellers keen to reduce their carbon footprint.

With this in mind, one of the world’s most ambitious luxury tourism developments, the Red Sea project in Saudi Arabia will have green and smart technologies at its heart as Saudi looks to diversify.

“We’re building 50 hotels, a new international airport, a new town that will accommodate the 35,000 people who will work there. Infrastructure that doesn’t exist is also part of this project. We’re committed to 100 percent renewable energy, 24 hours a day, seven days a week, totally off-grid. We’ll have zero waste to landfill, we’ll have no use waste plastics.

We’re going to be carbon neutral in our operations,” explains John Pagano, the Chief Executive Officer of the Red Sea Development Company:

“I think the country is also transforming itself, it’s becoming more open. You know they announced the e-visas just a couple of weeks ago, which was hugely successful. So, there’s a huge appetite to come and visit and explore Saudi Arabia.”

Greece has always been a firm favourite with tourists, attracted by the sun, sea and sand. But, beyond its beaches, the Greek mainland and the many islands offer a rich historical and cultural experience.

But the country also wants to put itself on the adventure map.

“We have many small destinations that are unknown and have a totally different atmosphere to offer. We have cities, Athens and Thessaloniki and other smaller cities.

They can provide all-year-round entertainment and we welcome visitors in the winter as well. And of course we have very many mountains, we have ski resorts, we have mountain walking, hiking, biking destinations, adventure destinations,” says Harry Theoharis, the Minister of Tourism for Greece.

The Spanish region of Valencia is a Mediterranean holiday hotspot where tourists are encouraged to let their imaginations run wild, coming up with their own distinctive experiences.

“Having a unique experience, is not only about the sun and beach, but also includes cultural activities like gastronomy, festivals, interaction with local people,” says Ximo Puig, President, Valencia Regional Government.

“A tourist is a person, we’re all tourists. We want to experience something new, something pleasant, that also has contact with people, with the local population.”

“The Valencian community offers hospitality, security and attention to detail. We want the tourist to be the protagonist, to decide, and to design their own experience.”

The Japanese capital offers all sorts of experiences, by day and by night. Sport is making the country a destination of choice for many right now, with the Olympics coming next year.

“The Rugby World Cup has just ended and we should say it was a great success and brought many tourists from Europe who haven’t been to Japan yet. So, I think next year, during the 2020 Games, the same thing will happen,” says Akito Tadokoro, the Director of the Tourism Promotion Department, Tokyo Convention & Visitors Bureau.

“Tokyo was the centre of Japan for more than 400 years and that means that we have many traditional, authentic experiences as well. And of course, food is very famous. So many things that we can offer, authentic offers to the tourists. Tokyo has the essence of Japan and Tokyo is the city of contrasts.”

Many of today’s travellers are looking to boost their health and wellbeing when they head overseas.

The wellness tourism industry is said to be worth around 575 billion euros a year. It’s a key focus at this year’s WTM, with many companies and destinations looking to tap into this lucrative market.

For Bulgaria, health and wellness tourism is a major focus. Last year, more than nine million people visited the country loved for its landscapes and a plentiful supply of natural mineral springs.

Morocco is a country where you can find bustling old cities, mountains and coast and discover some unique cuisine.

But the country which welcomed over 12 million tourists in 2018 has its own take on luxury tourism.

“In Morocco, you can find the most famous luxury brands in terms of hotels. But it’s not our main type of luxury. What we offer sometimes is a luxury tent in the desert, it’s a tour in a balloon, it’s this kind of things that we can offer because we have amazing landscapes.

The luxury that is based on space, on time, which is based on the availability of the needs of the tourists. And this is not always a very expensive luxury, so this kind of luxury is affordable for everybody,” says Jamal Younes Kilito, UK & Ireland Director, Moroccan National Tourist Office.