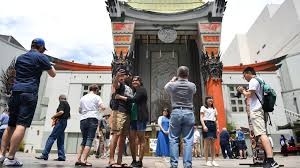 In an ambitious move Los Angeles Mayor Eric Garcetti has set a goal of welcoming 50 million tourists a year by 2020. The city is searching for a consultant who can help address problems that may stop the city from reaching that goal, such as traffic gridlock, a shortage of hotel rooms and rampant homelessness near tourism sites.

The request for proposals comes as tourism officials worry that President Trump’s travel ban and the harsh rhetoric from the White House about immigrants may give international travellers the message that they aren’t welcome in the City of Angels.

The final value of the contract will depend on which consultant is chosen and how much that consultant requests. The city has already set aside $250,000 in its budget this year for the proposal.

Unlike a marketing plan, the proposed five-year tourism development plan is intended to come up with ideas to make Los Angeles capable of hosting more tourists, said Doane Liu, executive director of the Department of Convention and Tourism Development.

By October, the city hopes to hire a private consultant to come up with plans for addressing “current and upcoming challenges” facing the city’s efforts to boost tourism, according to the city’s request for proposals. The challenges listed in the request include traffic gridlock, the need for sustainable growth, the need for more hotels near the downtown convention centre and the persistent homeless population near tourism sites.

Leron Gubler, president of the Hollywood Chamber of Commerce, noted that some visitors to Hollywood Boulevard are turned off by the sight of homeless people.

“How you deal with that is always a challenge,” he said.

Gubler suggested the city focus on creating new attractions to draw tourists, such as the recent proposal by Warner Bros. to build a $100-million aerial tram to the famed Hollywood sign, starting from a parking structure next to the studio’s Burbank lot.

The county welcomed 41.2 million domestic visitors and 7.3 million international visitors in 2017, a 2.6% increase over 2016 — marking the seventh straight year of new highs, according to the Los Angeles Tourism and Convention Board. The visitors injected $22.7 billion into the county’s economy last year, the board said in a recent study.