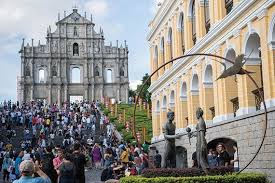 The central government will carry on aiding Macao in turning out to be a world tourism and leisure destination, senior officials stated on Tuesday at a meeting with a delegation from the special administrative region.

Luo Shugang, minister of culture and tourism, mentioned that tourism of Macao has a promising future, as domestic visits to the region rises with ease.

In the initial half of 2019, Chinese travelers comprised over 12 million visits to Macao, a 22.7 percent year-on-year increase, as per the ministry. In the whole of 2018, 25.26 million visits were made.

Zhang Xiaoming, director of the Hong Kong and Macao Affairs Office of the State Council, explained that the office will render all its efforts to support Macao in completely developing its tourism sector.

Luo and Zhang made the remarks at the meeting with a 32-member team from the special administrative region headed by Pansy Ho Chiu-king, general secretary of the Global Tourism Economy Forum.

Ho stated that Macao has made super success in its economy and tourism development since returning to the motherland in 1999. Inbound visits to Macao reached 35 million in 2018, about 4.8 times the number in 1999, she said.

“Macao has received great support from the central government and industry professionals in the tourism sector. This is helping to shape Macao into a diversified, stable and prosperous destination for travelers,” Ho said, stating that additional support is still required to defend Macao’s future development.

She explained that the special administrative region would like to have a more intense cooperation with the mainland in tourism-related education, conference and exhibition planning, talent exchanges and marine tourism.

“We hope that the training base for producing talent in the tourism sector will be authorized by the Ministry of Culture and Tourism in the near future. Also, we expect more support to help develop the conference and exhibitions industry in Macao,” she said.